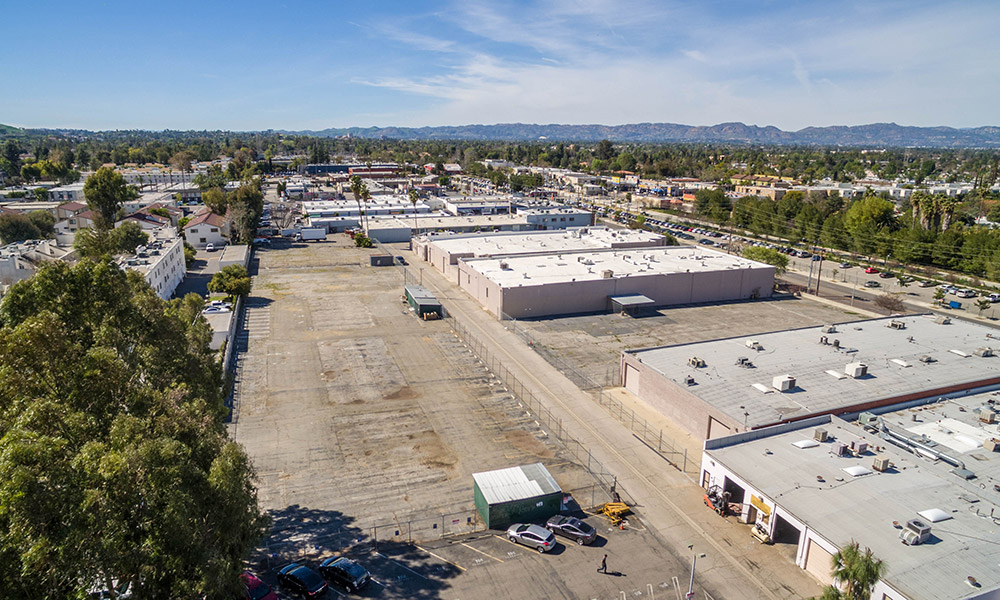 The owner of this unique 4-building +/- 73,000 square foot industrial property on +/- 4.25 acres of land had owned the property for over 30 years. The owner originally purchased these properties to operate his business out of. He sold his business to a large corporation who eventually leased the properties back from him for years until they vacated a number of years ago. The properties had sat vacant for years with the owner gleaning income only from short-term TV and movie productions. The properties are located directly across from the rapid bus line and within a neighborhood where transit oriented redevelopment is being planned. The various zoning designations on the property made it difficult for certain types of “by-right” development options including mixed-use and multifamily development. For years, the owner had been fielding numerous “off-market” inquiries from developers who were proposing a high price in exchange for the option to entitle the property for high density multifamily. However, these promises never carried through for a variety of reasons. This resulted in wasted time, energy, continued vacancy and lost income. The owner contemplated strategies of investing money in the buildings and re-leasing them to industrial tenants but he could not justify time, energy and the capital costs. The property was clearly valuable from a redevelopment standpoint however there was a lack of clarity on the true “highest and best” potential. The owner was at a point in his career where he was looking for passivity and peace of mind and wanted to maximize his cash flow without creating additional time, energy and money burdens on his life.

The owner was looking to gain clarity on the most realistic solutions with the properties that would garner the highest return. He hired the team of Avison Young and Lineage Asset Advisors to assist him in enhancing value by assessing (1) the realistic options with the properties, (2) recommend “highest and best” value strategies, and (3) implement the strategy that would achieve the best result based on his goals. Avison Young and Lineage Asset Advisors analyzed aspects of the properties including; the existing zoning and redevelopment potential, the potential of rehabbing and re-leasing the existing industrial / flex buildings, the transit oriented development incentives (transit neighborhood plans, transit oriented communities, density bonus, etc.), title, financing, sustainability, etc. The team also worked to understand the client’s specific goals in order to recommend a realistic approach and strategy. The team determined that rehabbing the existing buildings would likely be the solution to garner the highest realistic value for the property. Other strategies such as multifamily redevelopment were determined to be secondary solutions given some of the previous barriers that were met with other developers.  The team also recommended that the owner gain control and clarity over certain “unknowns” with the property. This clarity would create efficiency during the due diligence process and ultimately lead to a higher surety of execution in order to meet the owner’s goals. The team’s “discovery” phase helped them gain clarity on all aspects of the property.